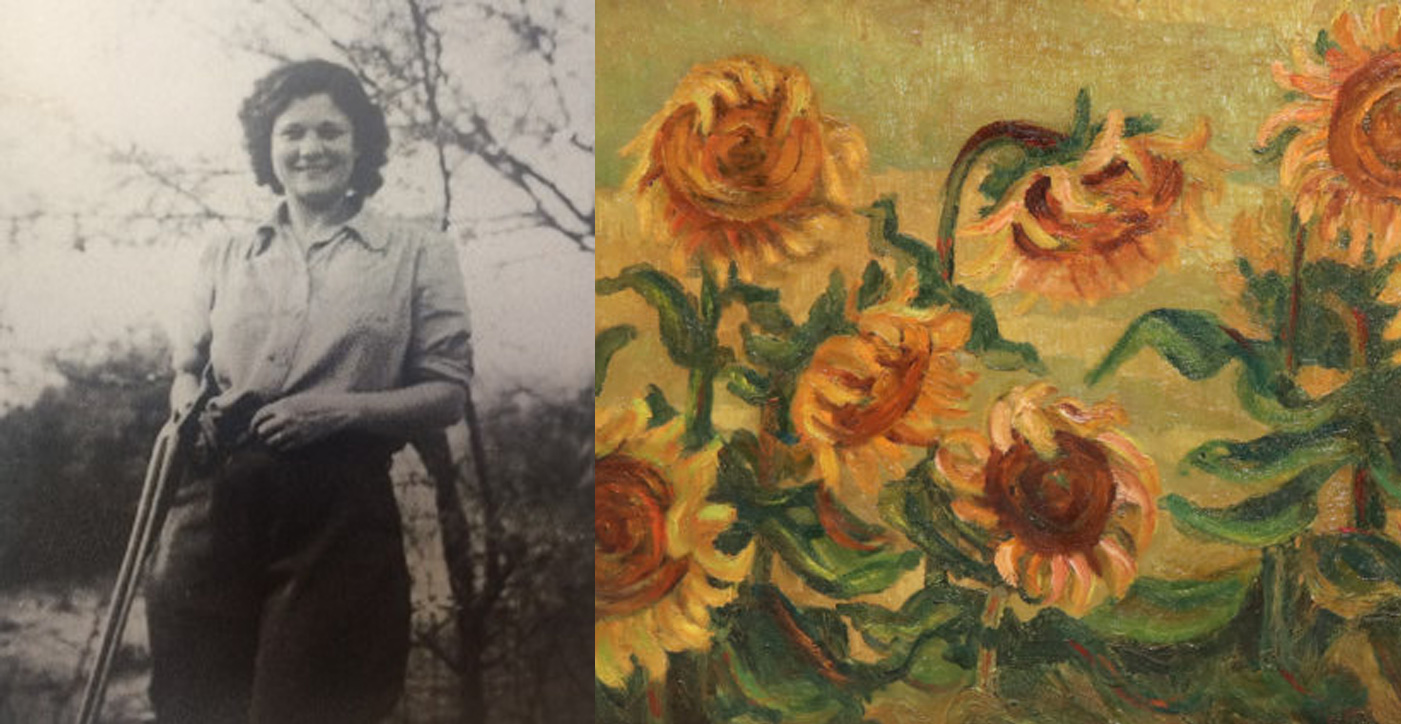 (1905-1998)     A dynamic artist and art educator, Sue Jean spent most of her life in south-central Kansas.  She studied with Birger Sandzen at Bethany College and is one of the few artists who did not adopt his palette and style.  A trip to Mexico City lead to her marriage and a decade spent being inspired by her surroundings, including muralist Diego Rivera.  In the mid-1940’s she moved back to Kansas with her two daughters.  During this time she established the art department at Southwestern College and an art therapy program at the former Winfield State Training School.

“It is not by pursing happiness that you find; it’s by living life abundantly.”
From journals of Sue Jean Covacevich featured “Covacevich”, published by the Wichita Art Museum 2006, written by Steven Gleissner, PhD. Chief Curator, Wichita Art Museum. 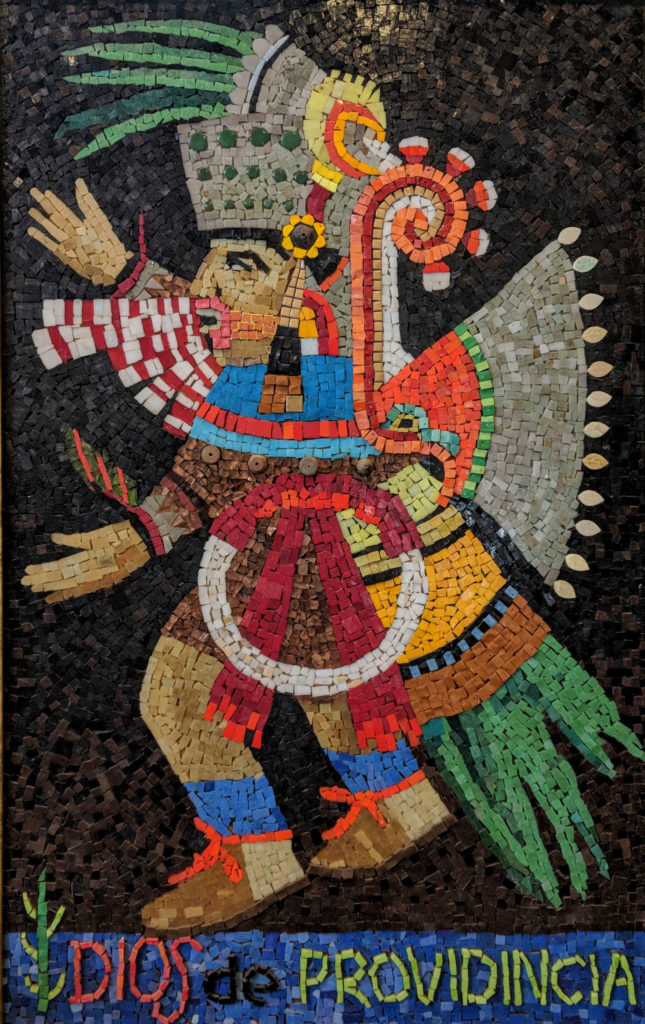 Many of Sue Jean’s works inspired by Mexico, Mexican history, and ancient Mexica cultural iconography were created during her time living in Mexico City from 1931 to 1942. She left Wellington, KS as a young Kansas schoolteacher inspired by her mentor Birger Sandzén who was fascinated by Mexico. 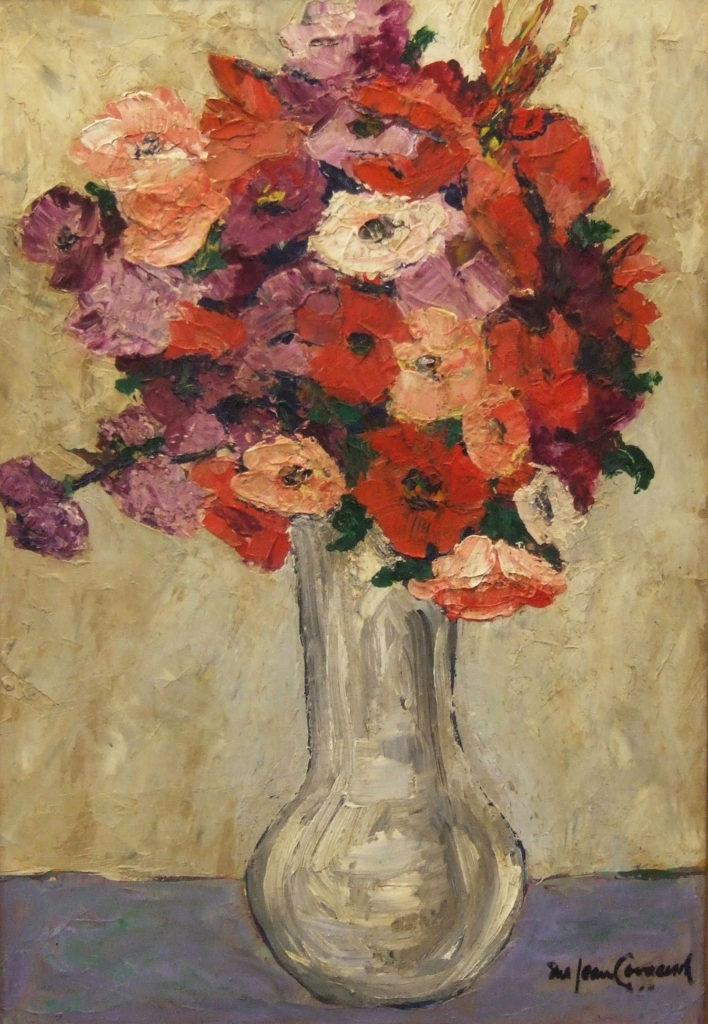 “What fate is it that makes me go on this trip? Why don’t I stay home, marry and be contented as a woman should? I seem to be searching for something which is unknown, even to my own self. I am going down to paint and sketch and rest. There is no one in Mexico and I hardly care.”
From “Following the Sun, The Art of Sue Jean Covacevich, 1905-1998” by Elizabeth G. Seaton with contributions by James I. Deutsch, Teresa Covacevich Grana, and Jerry Weist, published by the Marianna Kistler Beach Museum of Art at Kansas State University. 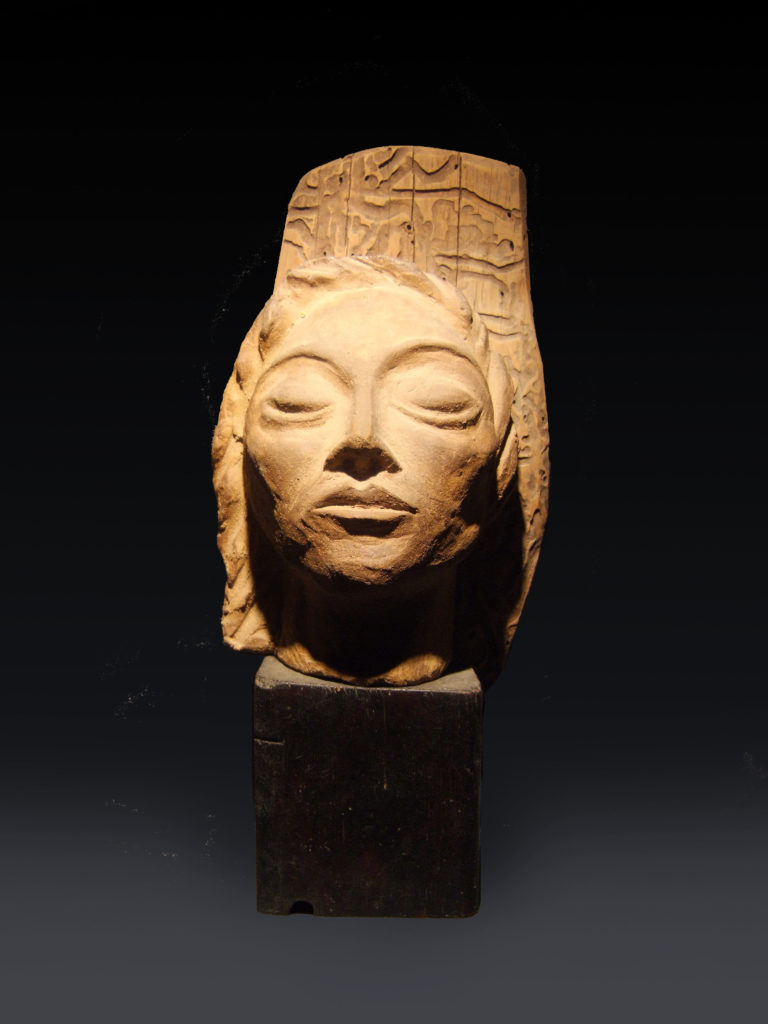 During her time in Mexico, Sue Jean married, had children, and built a home with her husband. She interacted with many notable Mexican artists like Frida Kahlo and Diego Rivera, and taught art at the American School from 1935 to 1939. While teaching at the American School, she organized students and volunteers to create murals and prints inspired by Mexico’s history. She most notably created many works in mediums such as block prints, lithographs, mosaics, paintings, murals, and sculpture inspired by Mexico and its history. 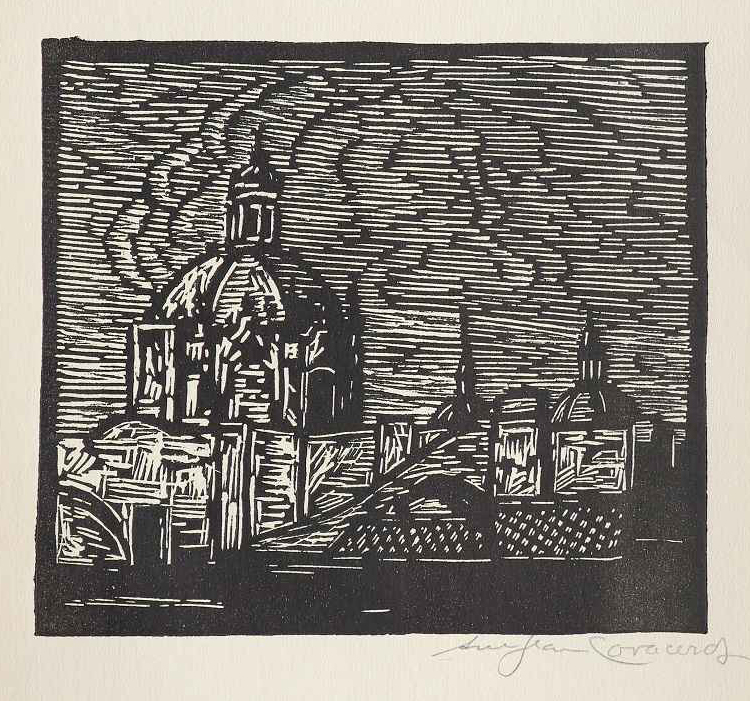 Notably, Sue Jean nearing her return to Kansas published a series of block prints depicting Mexican churches. “Domes of Churobusco” is one of those works featured in “Churches of Mexico” which was published in 1941. It is said that these prints share her impression of Mexican churches in likeness of the grandeur of ancient pyramids.
(“Covacevich”, published by the Wichita Art Museum 2006, written by Steven Gleissner, PhD. Chief Curator, Wichita Art Museum.)

In the mid-1940’s she moved back to Kansas with her two daughters. During this time, she also established the art department at Southwestern College and an art therapy program at the former Winfield State Training School. It’s evident in works like “Sunflowers”, that returning to Kansas brought Sue Jean back to somewhat familiar roots in an impressionist painting style. 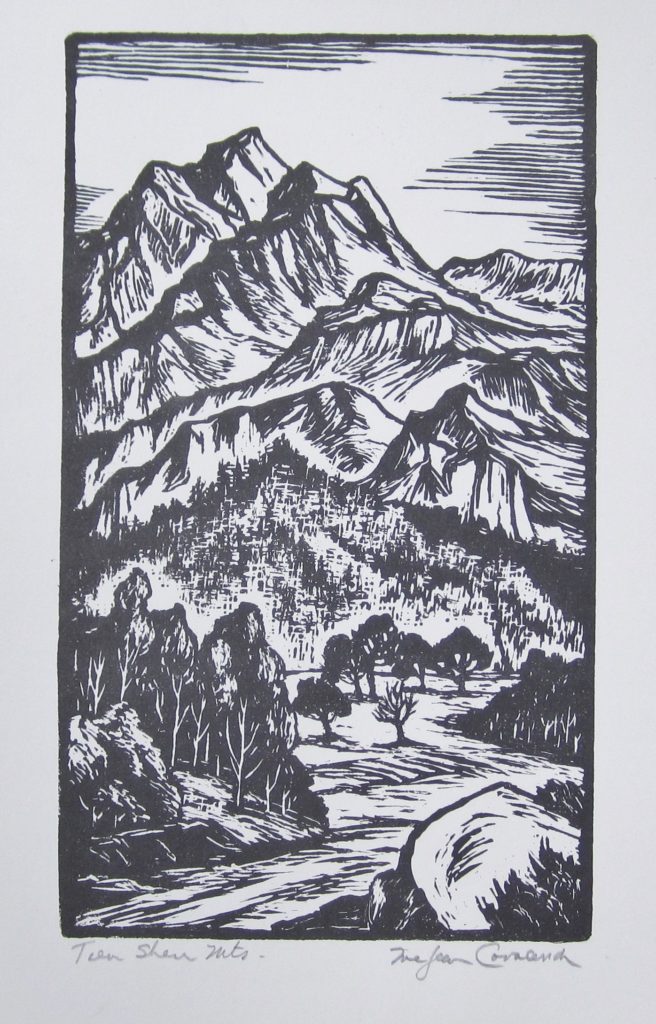 During the early 1950s and into the early 1970s, Sue Jean traveled around the world and made several block prints depicting the places she visited. Her travels ranged from multiple countries in Europe such as France, Poland, Greece, Italy, and cities throughout eastern Europe like Leningrad and Moscow. Sue Jean also traveled to Egypt, Lebanon, Syria, Iraq, Israel, India, Singapore, Thailand, Cambodia, Hong Kong, and Japan. Included are other works in our collection from Malaga, Spain, Michelangelo Square in Rome, Italy, and St. Michael Mount in Normandy, France. 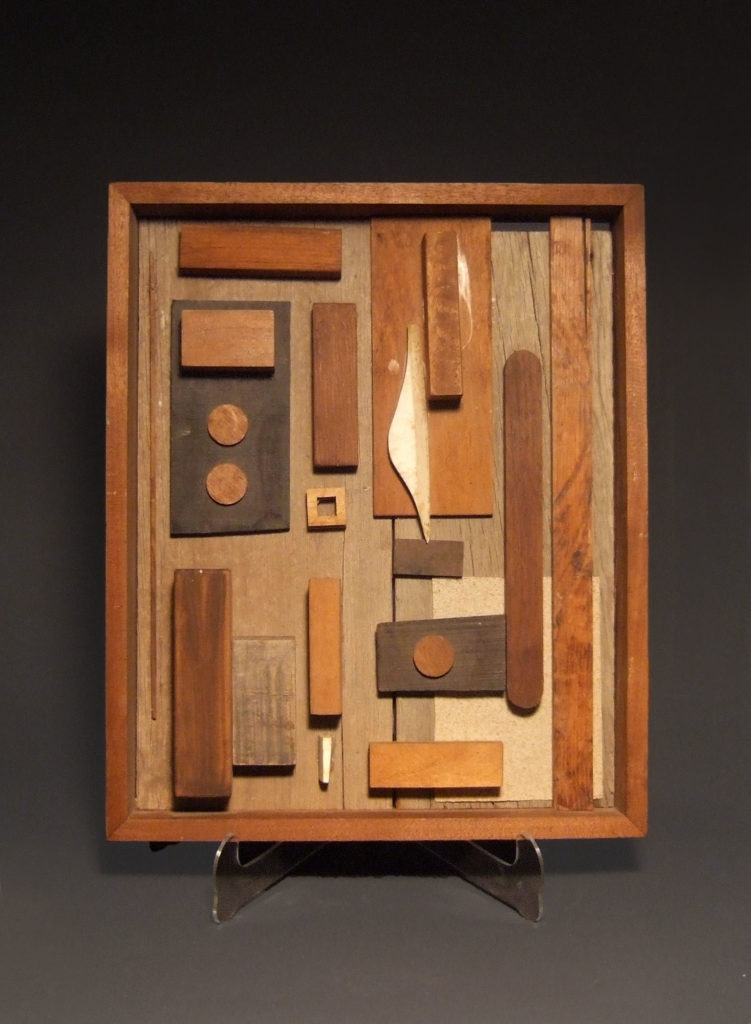 While Sue Jean’s works in the works of traditional painting are notable, her passion for discovery and exploration did not limit her to sticking with one genre, style, or mediums. From the 1950’s and onward, many works such as “Untitled (Box Sculpture)” showed her ability to create prolific abstract works. 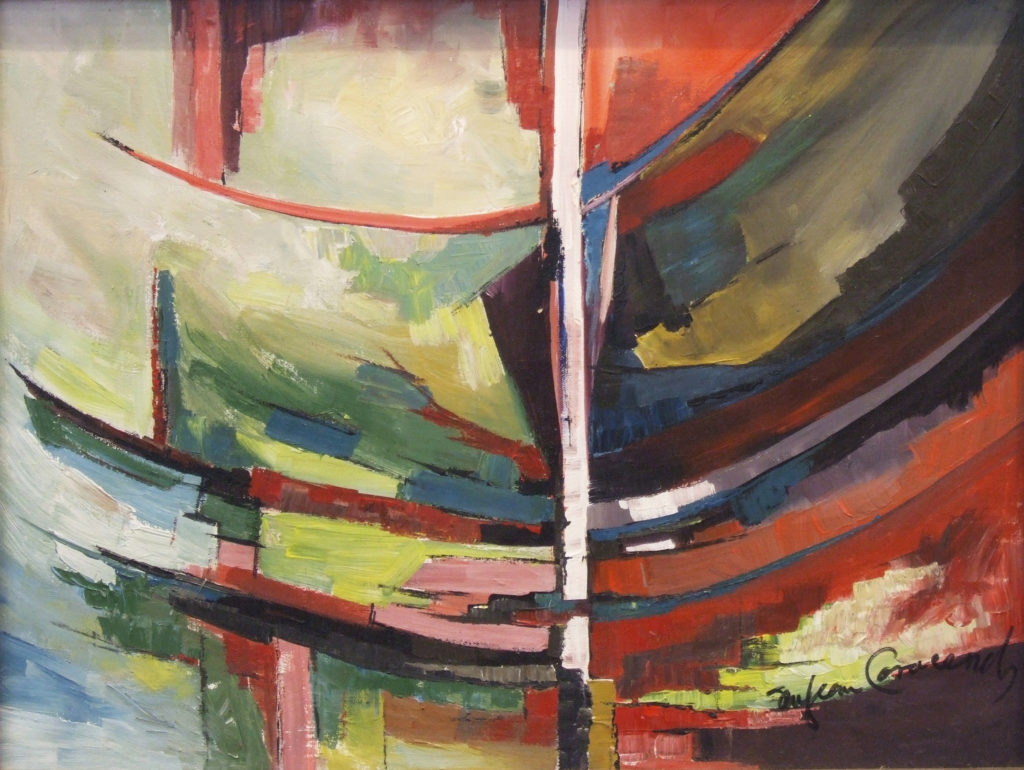 “Abstraction” is a striking example of just that, and further emphasizes Sue Jean’s passion for discovery and her ability to explore in her work just as she explored in her life. Living in Winfield and later teaching in Derby, she painted murals with her students and independently, created stained glass windows, and in the late 1970’s she created a monumental sculpture “Gateway to the Future” for the Bicentennial Committee of Winfield. Sue Jean Covacevich is considered a pioneer of abstract art in Kansas, and she is certainly a Kansas icon.