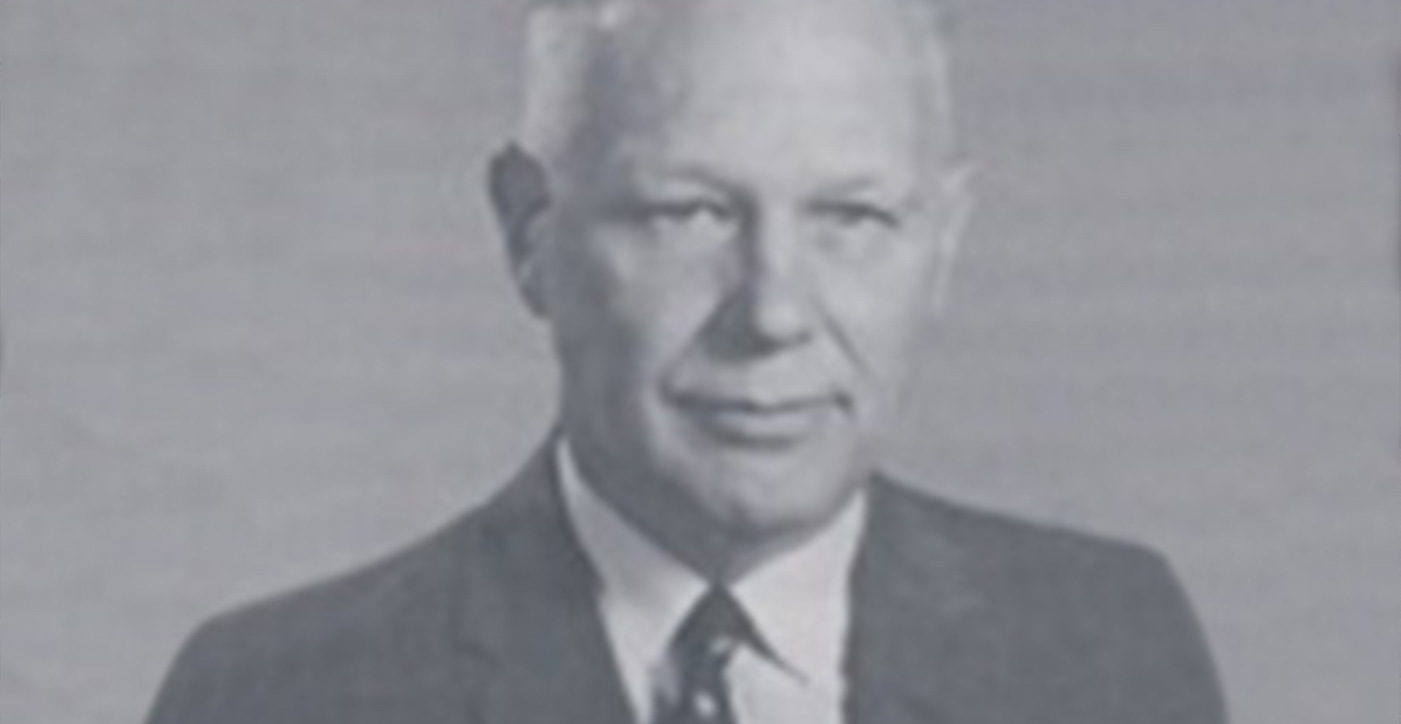 Chili Capps was born in Jacksonville, Illinois, where he grew up not too far from the woolen and fine clothing mill founded by his great-grandfather, Joseph Capps. His family was four generations of mill workers, and when Chili was a teenager even he worked in the family mill.

It is said that Charles was inspired by the dyes and patterns created by weavers, which may have sparked his interest in art. Fortunately, the Capps family had close connections to the Illinois College where Chili attended from 1916 to 1920. Chili graduated as the salutatorian after only three and a half years of schooling. 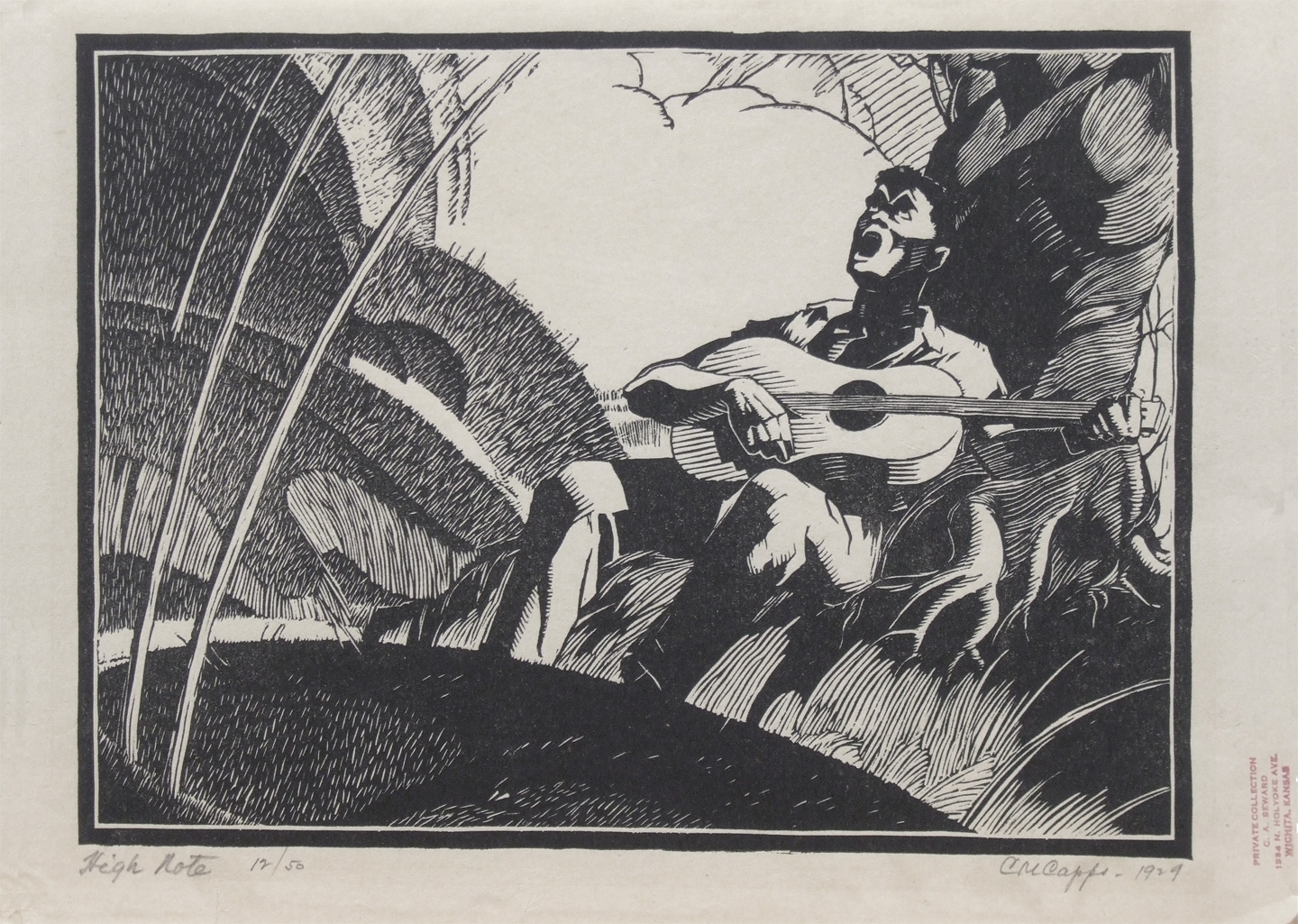 During Chili’s time at the Illinois College, he contributed to “The Rambler”, the student newspaper, and “Rig Veda”, the school yearbook, as a draftsman and cartoonist. It was here that he began his explorations in drawing, block prints, and aquatints. His work demonstrated his family life, the mill, and Illinois College.

After graduating from Illinois College, Capps left Jacksonville to attend the Chicago Academy of Fine Arts for one term in 1921. There he studied, most likely, the fundamentals of drawing, painting, illustration, creative advertising, commercial art, fashion, and theater. Not much is written as to why Capps spent a short time at the Chicago Academy of Fine Arts, but it is noted that he enrolled at the Pennsylvania Academy of Fine Arts where he studied with distinguished professors: Daniel Garber and Arthur B. Carles. Capps learned about Impressionism and Early Modernism. Capps focused his studies in the areas of drawing and illustration.

One of Chili’s professors stated that he did not really need too much instruction as he could already draw very well.

Eventually, Chili returned to Illinois where he worked with the advertising agency Hahn-Rodenburg Company in Springfield, Illinois. He continued to study art by taking drawing and painting classes at the Illinois Women’s College (now MacMurray College) taught by impressionist landscape painter Augusta Knopf.

Around 1992 Chili visited his sister Eleanor in Wichita, and while visiting he met C.A. Seward who at the time worked for the Western Lithograph Company. Chili was offered a job, and he accepted. Before moving to Wichita, Capps married Anna Weir Palmer on June 20, 1923, and they both moved to Wichita. Unfortunately, Chili and Anna did not stay in Wichita for very long due to Capps being unhappy with upper management at the Western Lithograph Company. With returning to Illinois, Capps became the art director of the Hahn-Rodenburg Company and held this position for two years.

In 1927, Anna and Chili had their first child Rhoda and they also moved to Alameda, California where Capps worked as a free-lance artist. Unfortunately, this was also not a successful move for Capps and his family. 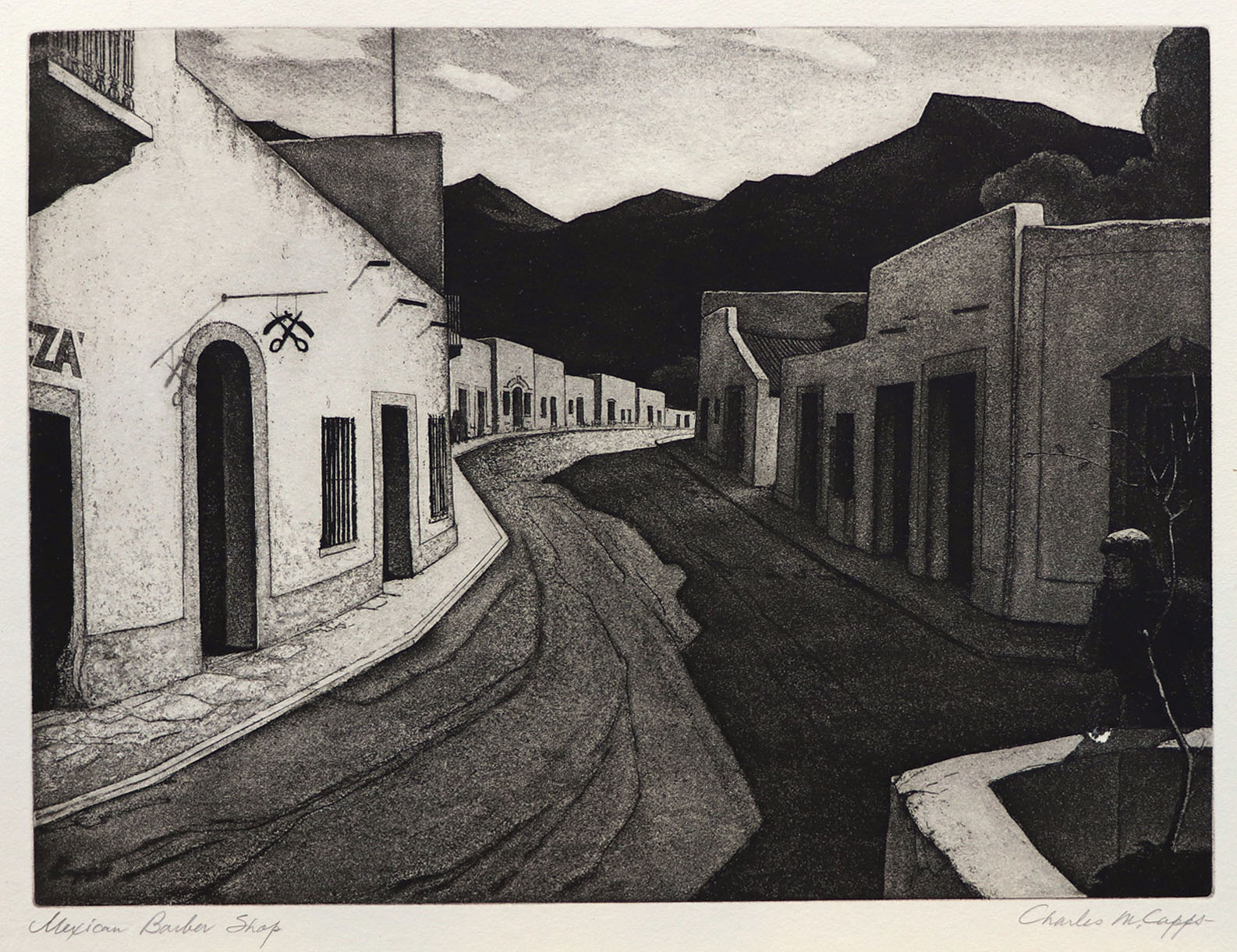 In 1928, Capps and his family moved back to Wichita where they stayed. Capps returned to the Western Lithography Company after working for a short time at the Capper Engraving Company. This time he worked in the art department directly with C.A. Seward. It was here Chili became close friends with other employees and well-known Kansas artists: Llyod Foltz, Clarence Hotvedt, and Bill Dickerson. It is written that Capps along with, Foltz, Hotvedt, Dickerson, as well as other well-known Kansas artists: Herschel Logan, Leo Courtney, and Arthur and Norma Basset Hall all worked in C.A. Seward’s studio together. This was the start of many lifelong friendships and even the famous Prairie Print Makers, which was founded by Seward in the 1930s.

Capps often noted the importance of his friendships, especially with C.A. Seward. He states, “I got interested in printmaking when I moved to Wichita and had the good fortune to live next door to C.A. Seward.”

It is from the notoriety of the Prairie Print Makers, Capps’ friendship with C.A. Seward and other artists that Chili had the opportunity to visit places like New Mexico where he made notable prints like “Taos” and this one featured here. 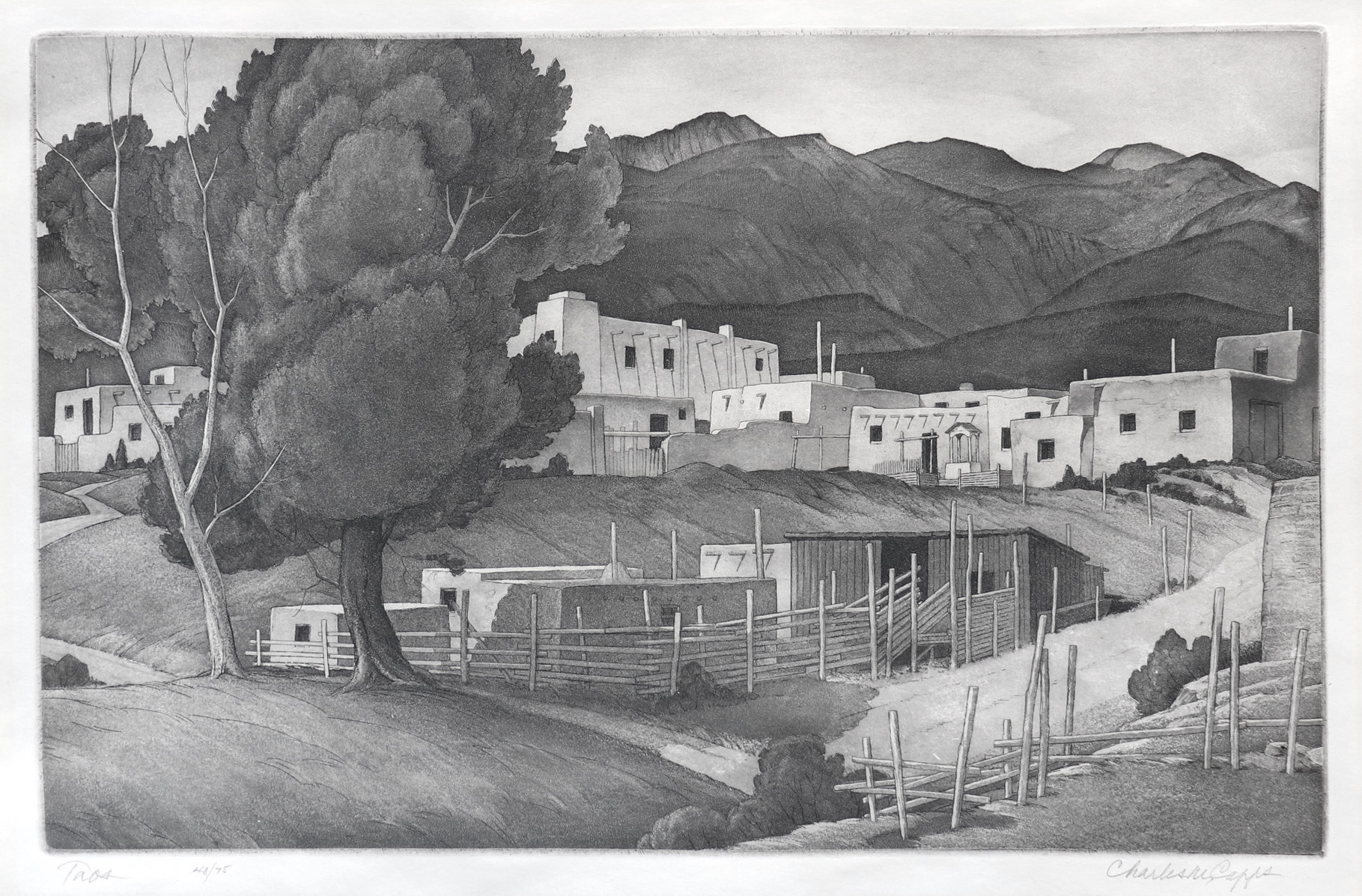 With Capps’ involvement with the Prairie Print Makers, the Chicago Society of Etchers, and the Print Makers Society of California he created quite a large number of woodblock prints, etchings, and aquatints that were exhibited in exhibitions such as “Wood Block Prints in Color by Leading American Wood Block Artists” and publications such as the New York-based: “Print Collector’s Quarterly”.

His membership with the Praire Print Makers as a charter member and eventually the vice-president Capps granted Capps the space to utilize his connections outside of Wichita to circulate not only his prints but others involved in the Prairie Print Makers.

Despite the success that Capps found with the Prairie Print Makers, Chili continued to work as a commercial printer. He eventually left the Western Lithography Company to work for McCormick-Armstrong as the Production Art Director and soon was promoted to the assistant superintendent. Capps handled many of McCormick-Armstrong’s aviation clients. 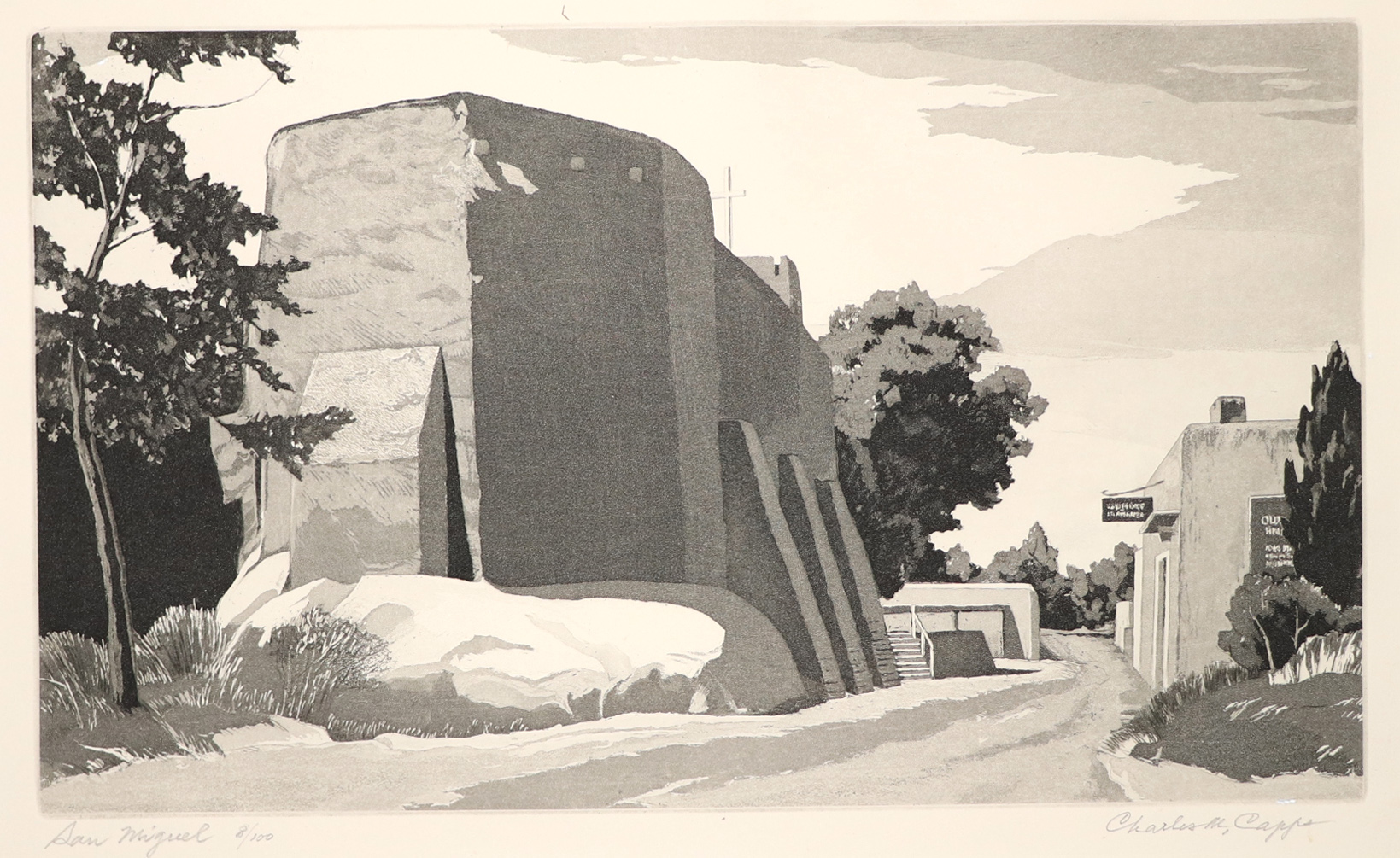 From 1957 to 1964, Capps did not create many of his own works due to the intensity of his work with McCormick-Armstrong. Fortunately, upon retiring in 1965 Chili began making artwork again. He greeted his new status with what he referred to as, “the vigor and enthusiasm of a kid fresh out of school.”

From 1965 to 1978, Capps created many prints such as this aquatint featured in his simple basement studio. Most notably he commissioned the last print by the Prairie Print Makers at this time titled “Idyl of New Mexico.” The last print of Capps was made in 1978, and three years later he died on July 17, 1981.

Charles M. ‘Chili” Capps was remembered as a loving father and husband, a professional in commercial printing, a good tennis player, an impressive bridge painter, an entertaining after-dinner guitar player, and if anything one of Kansas’s most notable printmakers.