Born in 1972 in Jacksonville, Illinois, James Oliver currently lives and works in Pittsburg, Kansas where he teaches painting, drawing, and color theory at Pittsburg State University.  He received his MFA (1997) from Tulane University, New Orleans, Louisiana, an MA (1995) from Eastern Illinois University, Charleston, Illinois, and a BFA (1994) from Denison University, Granville, Ohio.

I combine aspects from multiple sources- drawings from observation, color studies, and finally reference photographs to spark memory.  Figure and ground are organized with shapes, larger and smaller to move the viewer from space to space. These coupled with color relationships, build a space that can be viewed for both its sense of simplistic realism and an organic quality of abstraction.  Color is drawn from the actual hues visible in observation, and then manipulated to reveal its relationship to the perceived space.

In deconstructing the imagery to shapes of color, the focus becomes less on the possibility of reality, however plausible the end product.  The issues of composition and color and how they interact against one another to either amplify or flatten the space become paramount.

By scaling the work to an intimate size, gaps within the compositions and other more recognizable elements combine into abstracted, yet still identifiable and complete.  The smaller scale, I feel, integrates the viewer as an active participant in the experience of the work.  Rather than simply viewing the work passively, the viewer is asked to engage in the work by filtering the generalized scene through his or her own personal memories of the forms they recognize. 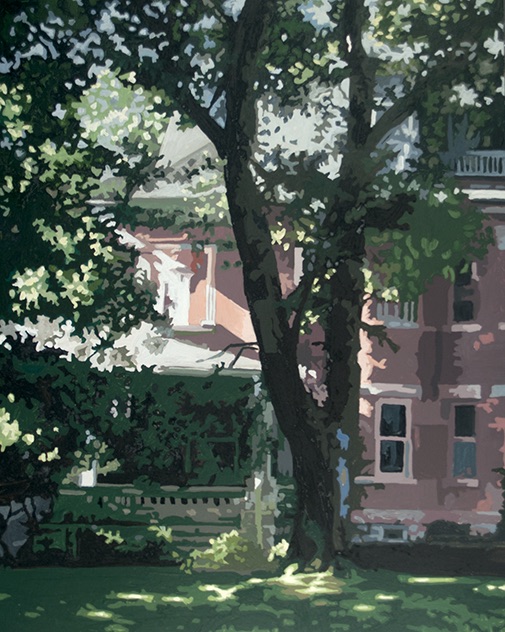