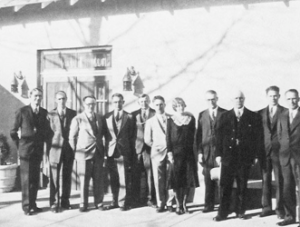 In 1930 at the invitation C. A. Seward of Wichita, KS a group of Wichita friends gathered at the Lindsborg, KS studio of Birger Svén Sandzen. Most knew each other from their jobs at either McCormick Armstrong or working for Seward at Western Litho. The group drafted a charter and formed a guild calling themselves the Prairie Print Makers. The charter members also included Charles Capps, Leo Courtney, Clarence Hotvedt, Arthur and Norma Bassett Hall, Hershel Logan, Lloyd Foltz and Edmund Kopietz. Carl Smalley, a gallery owner from McPherson, who may have just dropped by Sandzen’s studio that day is also included among the charter members. The first order of business was to issue and invitation to William Dickerson of Wichita to join the group. Their stated mission was “to further the interest of both artists and laymen in printmaking and collecting.” The organization did not stress a regionalist theme and it grew to include print makers from across the country.

For more information please refer to: C A Seward Printmaker