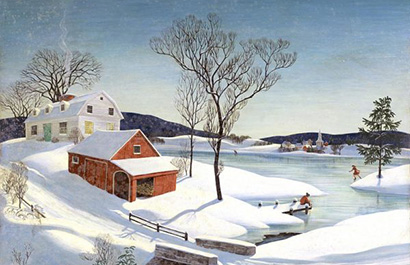 Charlotte Joan Sternberg, illustrator and fine artist, was born in Meriden, Connecticut in 1920. Early on, she became interested in art, and Charlotte shone as her parents encouraged her efforts. Charlotte attended public schools in the area, and took art classes at a local technical high school. Afterwards she attended the Yale School of Art. Her fellow classmates included Rudolph Zallinger, who executed the dinosaur mural at the Peabody Museum in New Haven; Jean Day Zallinger, renowned book illustrator; and Edward Paier, founder of the Paier College of Art in Hamden, Connecticut. It was at Yale that Charlotte learned how to paint in egg tempera, and was one of a number of Yale artists who revived this medium. Most of her well-known artwork was done in egg tempera. Charlotte did not work professionally in oils, although she sometimes worked in gouache or watercolor.

Charlotte went on to a long career in commercial illustration, doing imaginative work for fashion illustration as well as more conventional portraits, scenes and product illustration. She worked extensively for J. Walter Thompson, and did advertising art for such companies as Esso (later Exxon), Textron, and Lederle Pharmaceuticals. While she painted a variety of subjects, Charlotte was best known for her Americana themes, particularly snow scenes of historic New England. Many of these pieces were published as Christmas cards for American Artists Group. She also taught a wide variety of subjects for many years at the Paier College of Art. Throughout this period Charlotte continued to paint landscapes and portraits.

Charlotte was commissioned to do several portraits, including those of Gov. John Lodge of Connecticut and President Dwight D. Eisenhower in the 1960’s. Her artwork has been exhibited in one-woman shows at the New Britain Museum of American Art in Connecticut and the Bennington Museum in Vermont and is in many private collections. Later in her career Charlotte concentrated on landscape painting, and Greenwich Workshop produced a line of limited edition prints of her art.

The art of Charlotte Sternberg has been used on such items as tapestry pillows, puzzles and decorative flags and is still being produced on many decorative items today.Her carefully rendered paintings show her love of detail, both in the portrayal of old-fashioned everyday life and the detail of the landscape. The viewer can look at the many people in her paintings, wonder about them and imagine the stories behind their activities.   Charlotte invented the scenes in her paintings, and it’s up to the viewer to see the rest with their imagination.

Charlotte Joan Sternberg lived in Connecticut throughout her life and passed away in 2003. Today her work continues to be seen in many forms. Many products featuring her art continue to be made.