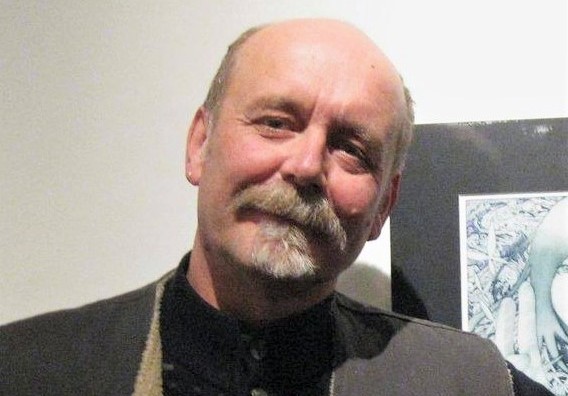 Gordon K. Sherman’s work has been described by some as “flying by the seat of your pants.” (He has always believed that was what honest mark making is). Gordon was never been content to simply record with the mediums he chooses, but rather explored and exposed his intent with a particular medium.

Sherman had a 23-year career as Professor of Art at Fort Hays State University, where he instructed in printmaking and drawing. He exhibited in well over 300 competitive, invitational, group and one person exhibitions over the last thirty years. He presented and/or participated in conferences, workshops, lectures and demonstrations in every geographic area of the United States. He was involved with commissions both nationally and internationally including Time Magazine, Absolut Vodka, USA Today plus private portraiture and institutional murals. His work is represented in over fifty public and private collections.

Mysterious and appointed iconography was always the foundation of his visual development. His imagery contains a strong sense of place that demands close attention. Manipulation of this “vocabulary” reveals his concern for human relationship to the environment and potential harmful vestiges of culture’s growth and decay.