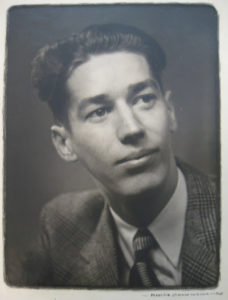 Reynold Weidenaar’s career has a legendary quality. Although he is now only in his thirties, he has already garnered 56 awards for his work from leading Museums and competitions throughout the country. At 15 he had won his first recognition in a national art contest and later in senior high school, he received eight prizes from national magazine competitions and two successive scholarships to the Kansas City Art Institute. There he gained entree to the night course in etching, but ironically he could not take advantage of the instruction because he had to keep a dishwashing job in a restaurant by which he supported himself. But the key to the etching room was his and by cutting other classes he was able to carry out his lonely experiments. A crowning honor came to him in 1944 when he recieved the Guggenheim Fellowship. Still later in 1948 he was given the Tiffany Scholarship which was then followed by the coveted honor – Associated Membership in the National Academy of Design in 1949. He is represented in every single important museum collection in this coutry (sic).  He now lives and works where he was born, in Grand Rapids, Michigan.”