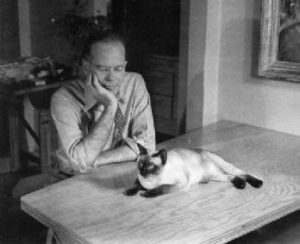 Philip C. Curtis ( American, 1907-2000) is best known for his unique “magical realist” style and has been called the “Magritte of the Old West”. He is one of Arizona’s most historically significant artists and his work can be found in major collections across the country including the Museum of Modern Art, the National Museum of American Art, and the Smithsonian Institution.

“Philip Campbell Curtis was born on May 26, 1907 in Jackson, Michigan.  He received a B.A. from Albion College where he had his first contact with painting.  He began to study law at the University of Michigan but he truly wanted to pursue art and enrolled  at the School of Fine Arts at Yale University.  After graduation in 1936 he became an Assistant Supervisor of Mural Paintings for the WPA in New York and the following year the WPA sent him to Phoenix to establish the Phoenix Art Center which later became the Phoenix Art Museum.  In 1939 he was sent to Des Moines, Iowa to assist in starting the Des Moines Arts Center also under the WPA Federal Arts Project.  He began Museum Studies at Harvard University in 1941 intending to prepare for museum work.  His schooling was interrupted by World War II service with the Office of Strategic Services in Washington, D.C.  In 1947 he returned to Arizona and settled in Scottsdale to begin his life as an artist. In 1949 he had a solo exhibition at the San Francisco Museum of Art and at the Civic Drama Festival Playhouse in Phoenix.  He then went on to show in New York City and Denver, and Ohio.”