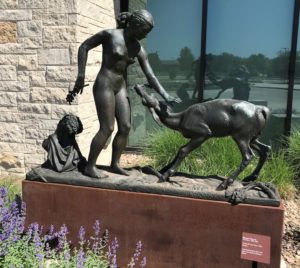 “While Bruce Moore was growing up in Wichita, Kansas, several prominent artists recognized his talent and helped him to develop his skills. When he was seventeen, he was accepted to the Pennsylvania Academy of the Fine Arts to study sculpture. He studied in France for two years, and spent two more in Rome. Moore’s work belongs to the art deco style of the 1920s, which influenced architecture, illustration, sculpture, and crafts. The artist created several crystal designs that were manufactured by Steuben Glass, including cups and vases for Queen Elizabeth II and President Eisenhower. He is best known for his sculpture General Billy Mitchell, which can be seen at the Smithsonian’s Air and Space Museum.” – via Smithsonian American Art Museum